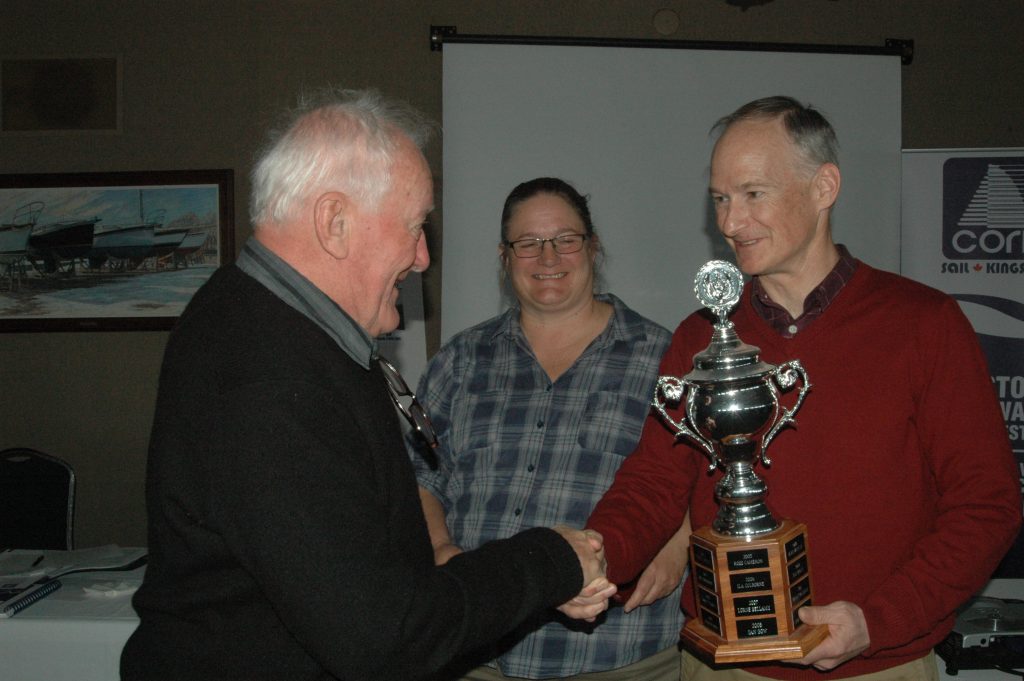 At the CORK Annual General Meeting (AGM) held this past weekend at the Kingston Yacht Club, Michael Nicoll-Griffith’s volunteer work was celebrated and recognized with the Douglas A.Heath Award.

Douglas Austin Heath was a long time volunteer with the CORK regatta. His involvement included being on the Board of Directors and Executive, administration of Opening and Closing Ceremonies, long term developments and much more. In his honour, the Douglas A Heath Award is presented annually –when appropriate- at CORK. In deciding upon a recipient, the Award selection committee considers a volunteer’s involvement, level of commitment, type of contribution and length of involvement. It is intended that the involvement be of a quality comparable to that of Douglas A. Heath.

This year’s recipient started his volunteer involvement with CORK the year before the Olympics in 1975 as a pilot (Pilots were experienced racing sailors tasked with stopping recreational boats going into courses). He was famous for taking on a Laker that was leaving elevator bay and trying to divert it. He also tried to stop the  rescue chief causing quite a furor.  He was working overseas during the Olympics but returned to CORK in 1979 as a competitor racing his Tanzer22 the first year keel boats raced at CORK.

In the mid 80’s when Offshore (Delta course) was being run from Confederation basin he helped with results, including  some of the first computer use on the water, entering times as boats finished the race. He continued to be involved with offshore for many years .

In 1996 he started working Jury as well as Delta results…He went on to become a valued Jury participant and was instrumental in implementing on the water rule 42 judging at CORK. He has been the Chief Judge for may CORK events. He served on the CORK board of directors,  implemented the Star Athletes program, and has been involved with awards and trophies several times in the years he has been a volunteer.

From working on the water in many roles, to helping with results and many jury roles, Michael Nicoll-Griffith has been a long standing dedicated volunteer.

We congratulate Michael Nicoll-Griffith for his tremendous contributions!

This entry was posted on Tuesday, April 11th, 2017 at 2:32 pm and is filed under Uncategorized. You can follow any responses to this entry through the RSS 2.0 feed. Both comments and pings are currently closed.