Douglas Austin Heath was a long time volunteer with the Canadian Olympic-training Regatta at Kingston (CORK), and his involvement with the regatta included long involvement on the Board of Directors and the Executive. His further volunteer efforts included daily visits to the office, intense involvement in class selection, supervision and administration of Opening Ceremonies, Awards Ceremonies and Closing Ceremonies and long term developments.

The Award is presented annually, when appropriate, to a volunteer selected from nominees by a Selection Committee (the Executive and a member of the Heath family). In deciding upon a recipient of the Award the Selection Committee shall consider the type of involvement, the level of commitment, the type of contribution and the length of involvement. It is intended that the involvement be of a quality comparable to that of Douglas Heath. It is further intended that the Award not be presented for involvement which ended prior to June 1996.

The 2020 recipient of the Douglas A. Heath Volunteer Award

We congratulate Suzanne Hamilton for her tremendous contributions to CORK! 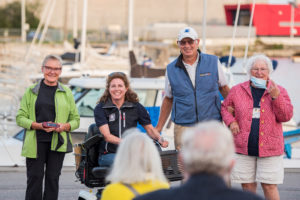 Suzanne and Blanche were presented the award in person by Janice Wilby and Rob Colwell on Saturday September 25th 2021 at the Tim Irwin naming ceremony.