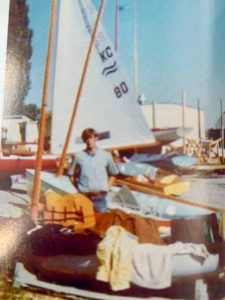 (photo from 1971.  I am standing behind my Finn with all the weight jackets I used to wear)

In 1971, at the age of 21, I drove my 1965 Pontiac with a borrowed Finn on a trailer to Kingston, Ontario for the new Canadian Olympic Regatta at Kingston.   It was a big deal.  We had about 40 Finns, maybe a few more.  All the big names were there. During one particularly breezy race about 15 Finns were approaching the leeward turning mark.  I was just behind the pack.  The waves were big and we were all surfing down the steep waves.   The battle for the inside position was intense.  Being behind the group I got to watch the scrum.   I was setting up to round behind the pinwheel of Finns.  The inside boat did a great job getting into position.  But, the sailor while rounding, forgot to put his centerboard down.   He slid sideways into the boat to leeward and that set off a domino effect with 15 Finns all banging into one another.  For me, trailing the mess about four boat lengths behind, I simply rounded right next to the turning mark and went from 16th (or so) into the lead.   Now, 49 years later I still smile about that moment. 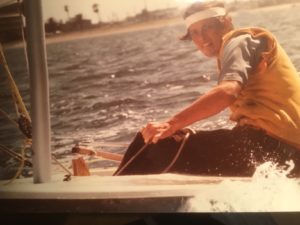 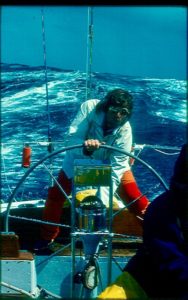 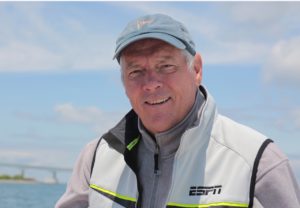 Thank you for sharing your story with us Gary!

This entry was posted on Wednesday, September 16th, 2020 at 3:15 pm and is filed under Uncategorized. You can follow any responses to this entry through the RSS 2.0 feed. Both comments and pings are currently closed.