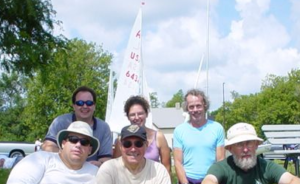 My first time at CORK was quite an eye opener as I had only 4 years experience as a sailor. I came to CORK in 2003 with 5 others members of SailRA (now merged with Ottawa New Edinburgh Club), for the International Albacore Championship. My crew (Bertrand Renaud) and I were there with AL7887. While the first races occurred in light winds, the conditions became more challenging… and this is where three memories stand out. On one start, we were in a very good position just beside the red hull Mega Wolf. While our speed and heading were similar to the other boat, we soon started being pushed sideways…. While I do not shy from sailing in heavy winds, it did not prepare me for important of properly managing waves….. as we do not have much of them on the Ottawa River. On the subsequent day, we were beating to the windward mark and needed to tack. I gave the command, my crew responded and initiated the manoeuvre. For a reason or another I was looking down through the manoeuver. I tacked and when I finally look up, my crew was no longer in the boat ! I look around and saw a few fingers on the port gunwale…. I put the boat in irons and help come aboard. When we tacked, his feet missed the hacking strap and he silently did a backflip in the water with no harm done. The last day was the most challenging race. On the last leg, running toward the finishing line, the boat started to roll from side to side and we capsized. Seven times we brought the boat back up and each time it capsized again. Two members which was not sailing due to the windy conditions and volunteer to be one safety boat, came around to help. Being exhausted, we decided that I would go in the rescue boat and one of them would take my place and jump in the water. They were able to finally bring the boat upright and started to sail toward the harbour. Suddenly the rudder line snaped and the boat once again capsized. After one more recovery, everyone was safe and sound in the harbour. When I came to CORK, I had two objectives: Have fun and not finish last in the regatta. It was a success all the way !

Ever since that first time I fell in love with CORK coming back to volunteer on Race Committees, Safety Boats and as a Judges, leaving the racing to younger and more experience sailors !

Thank you for sharing your story with us Martin!

This entry was posted on Wednesday, September 30th, 2020 at 7:15 pm and is filed under Uncategorized. You can follow any responses to this entry through the RSS 2.0 feed. Both comments and pings are currently closed.