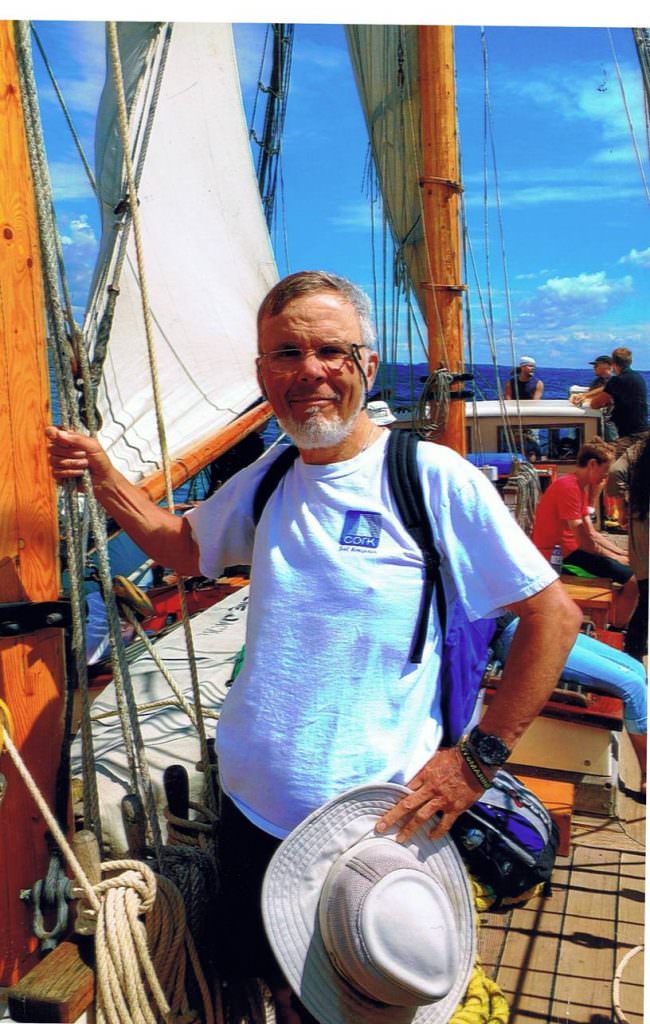 It is with the greatest regret that the CORK Board of Directors forwards this notice of the passing of Alan Walker on February 14, 2017.

WALKER, Alan Donald – 1948-2017 Peacefully, after a brief stay at Kingston General Hospital, on February 14, 2017. Alan Walker, son of Muriel and (the late) Donald Walker, brother of (the late) David (Sharon) and Peter (Carol Kostashuk), uncle to Allison (Lee) Hartley. Alan was a passionate and dedicated teacher who, in his twenty-three year career of elementary education, inspired so many and gave so much of himself to his vocation. Both his larger-than-life personality and active involvement in the Kingston community ensured that he touched the lives of many. He was devoted to working with young people, and enriching their lives through education, sailing, and leadership. Alan believed that all youth should be able to learn with confidence, joy and imagination. He attained the rank of Commander in the Naval Reserve. A past Commanding Officer of HMCS Cataraqui, he devoted many evenings, weekends, holidays, and summers to running training exercises locally and aboard ships on both coasts. The Brigantine St. Lawrence II became a lifelong passion after he joined the senior crew in 1964. As a volunteer, he rose to be senior captain and operations manager, and gave decades of service as a member of the Board of Directors. He continued to volunteer until he attended his last brigantine board meeting a few weeks before he died. Alan served as Aide-de-Camp to four Ontario Lieutenant-Governors, from the Honourable John Black Aird through the Honourable Hillary Weston. He had a distinguished volunteer career with many organizations in the community and committees of council at City Hall. He served on the boards of the Marine Museum of the Great Lakes and the local branch of the Navy League of Canada. In 1996, Alan suffered a traumatic brain injury after being struck by a motor vehicle while riding his bicycle. Although seriously impaired, he continued to serve the community through countless hours of volunteer work at Providence Manor, Fairmount Home, and with organizations such as CORK and the Salvation Army Kettle Campaign. Alan’s injuries could never dampen his enthusiasm and devotion to the community he held so dear. Recognized many times for his civic service, Alan’s awards include the Queen’s Silver Jubilee Medal, the Queen’s Golden Jubilee Medal, the Canada 125 Medal, and the Canadian Forces Decoration with Bar. The family wishes to express gratitude to the many long-time friends who have helped Alan live his life to the fullest both before and after his injury. Special thanks are due to Dr. Pelletier and the dedicated team who have helped Alan continue living in his own home and carry on with his passion for serving others. A Celebration of Alan’s Life is being planned for the spring. Memorial donations may be made to Brigantine Inc. (St. Lawrence II).13147476

This entry was posted on Wednesday, February 22nd, 2017 at 7:13 pm and is filed under Uncategorized. You can follow any responses to this entry through the RSS 2.0 feed. Both comments and pings are currently closed.