We have to share the wonderful article Published in Scuttlebutt Sailing news this week.

Here is a photo of Sarah competing at CORK this past summer taken by Sailing Shot. 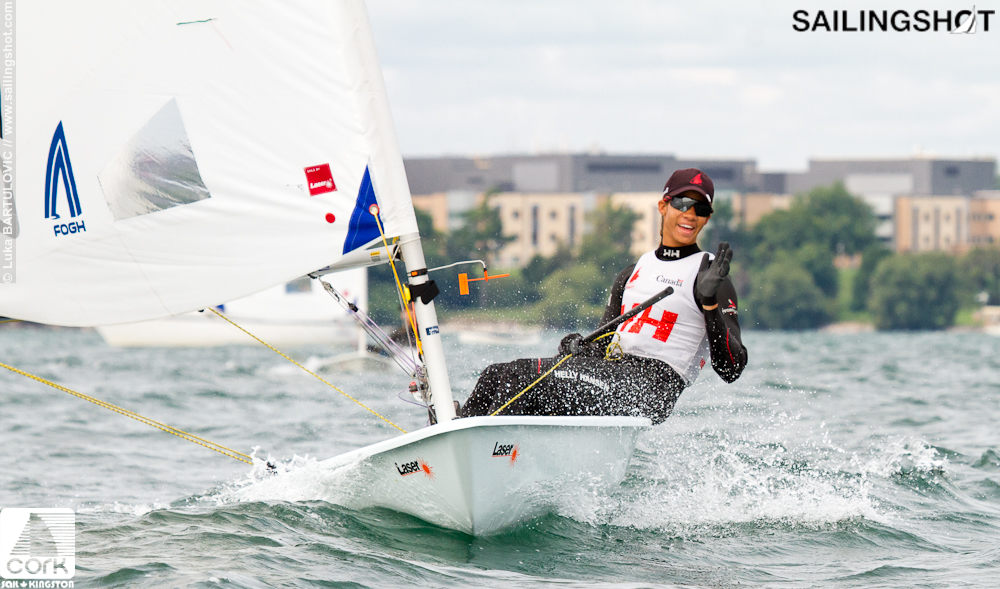 Now 25 years old, Sarah Douglas is making noise as she works toward the Tokyo 2020 Olympics. Sailing the Laser Radial, she just finished second in the Laser US Nationals which qualified her to compete at the 2019 Pan American Games. Scuttlebutt editor Craig Leweck checked in with Sarah for an update.

We’ve never met but you look tall in the photos.

I heard you are originally from Barbados?

Yes, I lived there until I was 14 and then moved to Canada for High School. I used to compete for Barbados and switched countries in 2008, both my brother and I, which is when I started sailing the Radial. And 11 years later you are now world class. Was this a steady climb?

Sort of. I was doing very well in the youth racing but it got to a point where it wasn’t fun anymore, so I turned my attention to volleyball. For two years I stopped competitively racing and training, but I stayed in touch by coaching Optimists and sailing for fun.

Every now and again I’d do a regatta, like CORK, and despite my approach I was still doing well and one summer qualified as an alternate for the Canada Summer Games, which is a multisport event that’s a big deal in Canada.

Prior to the Games, at a weekend camp where all the sports came together, the experience was very inspirational with lots of team bonding and motivation from presentations by past Olympians. One of them was Rosie MacLennan, who’d just come back from winning a gold medal in the trampoline, and she was speaking about her Olympic experience and what the medal meant to her.

I was sitting there, thinking to myself, “What am I doing? Why am I not trying to get a medal?” I was enjoying sailing at this point, and from then on I began training again. I met with the two provincial coaches, and they thought I could make the national team next year, and have a shot for the next Olympics.

This was probably 2014, and while it seemed like a longshot, their confidence inspired me. I got serious about my training, putting on 10 pounds of muscle. I showed up for Miami World Cup, but then had a breakdown in which I missed all three races one day which blew my chance at getting strong support from Canada.

It was pretty heartbreaking, but I picked myself back up, and despite not getting the funding, I was able to train with the national team which was a big step for me. I never really considered myself one of the top girls in Canada, but I was trying to learn as much as I could and I ended up progressing a lot.

The last qualifier for the Rio Olympics was the 2016 World Championships, and I ended up 21st and second Canadian. It was my first World Championship so I was really happy with that. So while I wasn’t going to the 2016 Games, I looked at this current quad as my chance to be not just the top Canadian in the country, but top in the world.

So the people around you helped you see your potential?

Last year was huge as you were in a position to win the 2018 World Championship. How’s the view from the top of the mountain?

It feels good. Every year I think I’ve made a big jump. I was 21st at my first World Championship in 2016, I came 12th in 2017 and then came in 6th in 2018 after a rookie error in the medal race. So yeah, I’m really happy to be where I am today and continue the work. My coach and I are very excited about where I’m at and the potential in making that next step to the podium. That’s the next goal.

Your brother Greg had previously campaigned in the Finn. What did you gain from his experience that you’ve tried to apply to your campaign?

It was really cool to see Greg compete, and travel, and learn about behind-the-scenes stuff. My family is very involved in my program. I constantly go to my brother and my parents for advice on whether it’s budgeting or sailing, and they are very much a part of my behind the scenes, as well. But to see Greg competing and doing what he loves, and traveling all around the world, and what he was doing in his program. He was very, very fit when he was sailing the Finn, and that inspired me to try to be one of the fittest as well. It’s something you can control. . It’s really cool to have watched him and then now to have his support.

This year will be incredibly busy for me. I have a lot of training planned, and then I have a lot of competitions, as well. I’m just really looking for more time in the water, high-quality sessions, high-quality training partners, and the 2019 World Championship. This is my main event. That is what I’m focusing on. That’s where all my energy is going towards, but I am also looking forward to representing Canada at the 2019 Pan Am Games. But I still must keep my eye on Tokyo 2020 so there will be a lot time training in Japan. I’m really looking forward to this year which all gets started at the World Cup Series Miami.

This entry was posted on Friday, January 25th, 2019 at 6:40 pm and is filed under Uncategorized. You can follow any responses to this entry through the RSS 2.0 feed. Both comments and pings are currently closed.